The celebrations of the Avirbhav Divas of Gurudeva Sri Sri Paramahansa Yogananda began in early January this year, and lasted for nearly three weeks including programmes at Yogoda Satsanga Math­—Dakshineswar and at various YSS Dhyana Kendras across West Bengal.

The commemoration of Janmotsav is marked with an annual five-day programme at Dakshineswar ashram­—drawing joyous participation of devotees from Kolkata and across India and overseas. The programme included classes conducted by YSS sannyasis in three languages: Bengali, English, and Hindi.

Over the five days, devotees attended inspiring satsangas, reviews of YSS techniques of meditation, morning and evening group meditations, kirtans, and video shows. The ashram was charged with spiritual vibrations at the Kriya Diksha ceremony, which had nearly 380 attendees.

The Janmotsav day, January 5, 2020, began with the prabhat feri. Devotees, led by Yogoda sannyasis, sang devotional kirtans as they carried Gurudeva’s picture on a decorated palanquin through the by-lanes of Dakshineswar. After nearly an hour, the entourage made its way back to the ashram where devotees attended a satsanga by Swami Krishnananda, which was later translated for devotees into Bengali by Swami Achyutananda. The programme was followed by the distribution of prasad to over 5,000 people including devotees, friends, and people from the neighbourhood.

On this occasion, the Governor of West Bengal, Sri Jagdeep Dhankar and Srimati Dhankar visited Dakshineswar, and were warmly received by YSS sannyasis and devotees.

The evening of Guruji’s Janmotsav culminated with a special cultural programme by the children of Children Satsanga.

Janmotsav celebration at Garpar Kendra was held on January 11, 2020. The programme began with the prabhat feri, where devotees carried Guruji’s palki through the streets. The procession was led by Swami Amarananda and Brahmachari Sahajananda. Members of Gurudeva’s family, Sri Somnath Ghosh along with his son-in-law, and Mrs. Muktamala of Ghosh’s School of Physical Education, also joined the procession. The prabhat feri finally came to 4 Garpar Road, Gurudeva’s ancestral home. The participants paid homage in front of a decorated picture of Guruji which was followed by distribution of prasad.

A public talk was organized at Ram Mohan Hall near Garpar Kendra. The talk began with kirtans which was followed by a talk by Swami Achyutananda. Around 180 people had gathered for this programme. The function ended with the distribution of prasad.

The day-long celebrations came to a close with a bhandara which was served to the local people at the Dhyana Kendra. Nearly 700 people partook of the prasad.

In the evening programme, a special meditation was conducted followed by pushpanjali.

The 128th birth anniversary of our beloved Gurudev was celebrated at Yogoda Satsanga Dhyana Kendra — Serampore on January 12 with a day-long programme.

In the satsanga by Swami Achyutananda, he narrated the essence of religion and its relevance in the modern era. This session closed with devotees offering floral tributes at the altar during the pushpanjali. Later, bhandara was served at Anandalok, during which around 450 devotees and local people were served prasad.

The concluding part of the programme was the evening group meditation held at the Smriti Mandir followed by pushpanjali.

Similar commemorative programmes were also held at several other Yogoda Satsanga Dhyana Kendras in Dihika, Telary, and Payradanga till January 26, 2020. 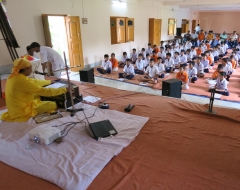